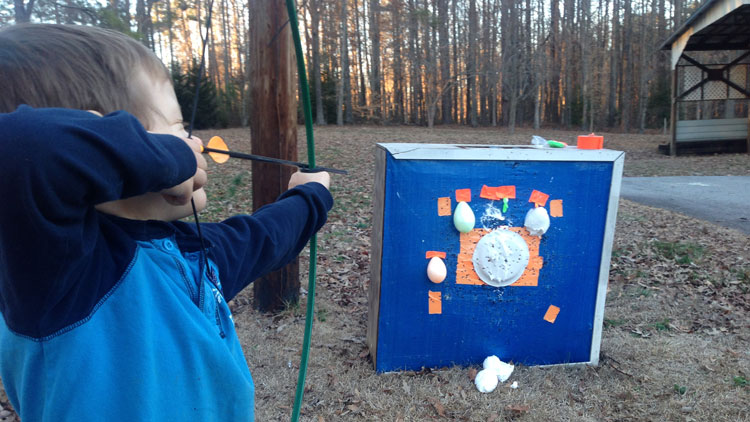 Just Enough Explosion, Not to Much Mess.

In case you can’t tell from the worn out, shot thousands of times, homemade archery target in the post pic: my family loves archery.

In the evenings while most folks are on Facebook stalking co-workers and ex-whatevers, chances are I’m outside shooting my bow. It’s a refreshing, calming, and rejuvenating way to use my spare time, I love it. What’s even better?

My kids love it almost as much as I do. Almost.

Granted, shooting a bow and arrow has a lot going for it at the start. When you hold a bow in your hand with an arrow nocked onto the string, there is an adventurous side of you that wakes up, and wakes up hungry.

Even though there is all kinds of  awesome already built-into archery, I like to add to the natural draw by making it a heck of a lot of fun for my boys to shoot.

Step 1: Finding a Bow That Fits.

One of the best things I’ve ever done was to get the boys a bow that fit them well. Last year, my oldest son put me in a real pickle. He was begging to shoot with me, and wanted to be rid of the plastic & suction cup bows he kept breaking (yeah, we went through at least 3).

With his birthday approaching, he capitalized on the opportunity like the miniature litigator he is, “Now that I’m a big boy, can I get a big boy bow like you Dad?” I’m sure you can imagine the conversation. I’m sure you can also imagine how incapable of resisting I was. A bow for his birthday it would be. Now the problem was figuring out which one.

We shopped around, and it wasn’t looking good. I was beginning to think he would just have to wait another year or two. Most of the bows we found were either too strong for him to draw, or were toys. That’s when I took to the internet (like I should have in the first place) and found that a lot of guys were recommending Bear Archery’s “First Shot Youth Bow”. It sounded like a great fit for what we needed, and I was able to find it on Amazon.com for less than $25 with arrows and all. Perfect.

I wish you could have seen his face when he opened it. He was excited, to say the least. It didn’t take him long to get surprisingly good at shooting that little bow. Shooting a bow and arrow was oddly natural for him. Much like learning to walk or count, it seemed to be something he was always meant to do.

Soon enough, the lure of the yellow bag target started dwindling. He just wanted to shoot everything! I was smart enough to realize that I should probably channel that desire into something appropriate before we started losing chickens and windows to his new found talent.

There are only so many times a kid will want to shoot a huge blue box stuffed with old coats. It was time to get creative. We started out chasing a Coke can around the yard with is bow. He punched dents and holes in it until it was a ragged gnarly mess. We went through a few different ideas before we finally struck archery practice gold: SHAVING CREAM FILLED BALLOON TARGETS! It’s very simple, here’s what we do.

You’ll want to use the traditional (and cheap) style shaving cream. This can was $1 at Wal-Mart. You’ll also want to use thin water balloons. Regular sized balloons have too much stretch to them and could cause an arrow to bounce back if not properly inflated.

Once you’ve got the balloon filled up and tied closed, just tape it to the target and get after it. It usually takes my boys several attempts to hit the balloon from about 10 yards away. If it’s looking like they need some help, I’ll tape 5-6 shaving cream filled balloons to the target. It usually speeds up their success of hitting one (even though they never let on if it was where they were actually aiming or not).

When the arrow pops the balloon, it’s as if the balloon was never there. An oval blob of shaving cream falls down making a funny ‘plop’ when it hits the ground. The ‘plop’ is the boys’ favorite part. One can of shaving cream makes about a dozen targets.

We are a hunting family. Actually, that’s how I got into archery in the first place. I wanted to bowhunt and that’s not something you just pick-up and start without lots of practicing first. During hunting season, I like to use a big printout of a deer body on cardboard, like this one I got for $13, in front of my big homemade target. It’s good practice for me and it’s exciting for the boys.

They like to wait (well, wait may be a stretch) until I’m done practicing and then have a turn shooting the deer target too. We talk about what makes a good shot on a game animal, where to aim, why we hunt, and how important it is to shoot accurately.

They boys are always asking to go hunting with me, and until very recently they’ve been too little for me to take them along. So, in an effort to involve the guys in our hunting lifestyle, we created ‘Hunt the Turkey’.  Here’s how it works…

I take my 3D Turkey target and move it around the yard somewhere. Then, the boys and I “scout” for turkeys. When someone spots them, we stalk in together. They take turns as the shooter while the other acts as the spotter, calling out ranges and letting everyone know if the turkeys are looking up and we need to freeze. We work our way into range until the shooter takes his shot. It’s a lot of fun, and the guys love it. For me, it’s a great opportunity to teach safety and share in the hunt with my little guys.

For example, here’s a video I took of one of our ‘hunts’. You’ll notice my middle son, Clint, breaks our rule of always being behind the shooter, realizes it, and gets to a safe place. It’s a game and it scratches their itch for adventure, but it’s also a great learning exercise for the guys. The video quality isn’t great, but you can get the idea.

Not a bad shot was it? Now if I can only get him within 5 yards of a turkey I may have a hunter on my hands!

So what do you do to help your kids fall in love with archery? Do you have any tips, tricks, or ideas that have helped you share the love of archery with your family? Make sure to leave us a note in the comments below.

Side Note: You all have been great about helping each other out and speaking up in the comments on our posts lately – and I LOVE it, thanks so much for being a part of this journey with us!