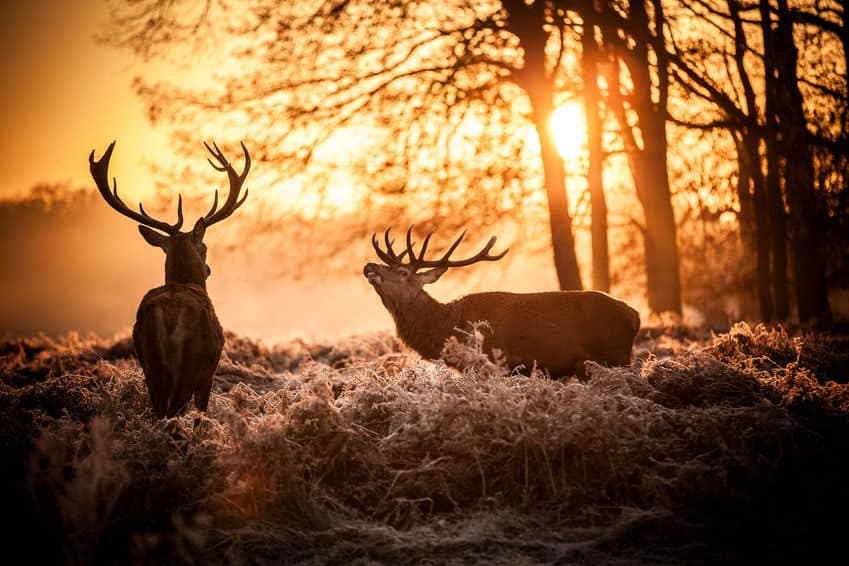 The number one state for most deer hunters is probably their home state. With access to local knowledge and lower fees, it often pays to hunt close to home.

However, there are a few states where the out-of-state license is well worth the cost – and drive. Here are the top ten deer hunting states.

Iowa has a reputation for giant deer, and this reputation draws hunters from across the United States. With a relatively low density of hunters and a high density of Whitetails, it makes for a great hunting getaway. The best option when looking for deer hunting lands in Iowa is to seek out a private lease.

When looking at the top Booner states, Iowa, Illinois, Wisconsin and Ohio bring out the big bucks. As natives of the Buckeye state know, Ohio doesn’t bring out the biggest deer every year, but it has earned its spot among the top four states and is well worth a visit. There’s about 750,000 whitetails spread out among Appalachian foothills and farm fields. With an affordable non-resident license and plenty of public hunting lands available, even the budget-conscious hunter can take down a deer or two in Ohio.

Texas boasts 1.6 million acres of public land available for hunting. Most choose to find a land-lease or opt for an outfitted hunt. A week-long hunt in Texas is a pricey but worthwhile. The sheer size of the state combined with the number of hunts, and the ease with which tags are dispensed over the counter, allows Texans to regularly take down the most deer of any state by a large margin.

When hunting deer in Illinois, a game call can be the difference between bagging a Booner and coming home empty-handed. While Illinois doesn’t stand out as having the most public hunting lands, it does have one very significant distinction. From 2005 to 2010, Illinois entered 299 bucks into the Boone & Crockett books. Having the second most trophy bucks of any state is a distinction that makes Illinois worth the trip.

The last few years have seen an increase in attention that has put Missouri deer hunting on the map. There are large quantities of public hunting land available and fewer hunters per square mile than many other states. Additionally, more than a third of the buck harvest is at least 3.5 years old.

North Dakota has a great population of enormous buck. Additionally, the state has a very low density of hunters and plenty of public land. This lack of competition means the herd is very healthy in most parts of the state. Before going out on a hunt, it’s a good idea to set up a few game cameras to collect some intel on the local herd.

The Wisconsin herd tallies in at around 1.2 million deer and the public hunting land adds up to about six million acres. That’s an exciting proposition for many hunters. While stalking the herd, hunters should bring a hunting day pack and plan to spend a few nights in the wilderness. Another option is to lease a hunting lot or join an outfitted hunt, which typically costs a premium. The reason for that high price tag: Wisconsin hunters brought down 2,088 bucks registered by Pope and Young in the last five years.

Indiana offers the highest chance of taking a Booner. Over the last ten years, Indiana has remained in the top ten for total Booner & Crockett entries. Lots of public hunting land and a 50 percent success rate make Indiana a great state for hunting deer.

Kentucky is one of these best-kept hunting secrets. Hunters here find long seasons with a large and healthy herd of trophy bucks. In addition, the regulations are friendly toward hunters and there are tons of public land. It’s also possible to find many hunting trips and leases throughout Kentucky.

There are two ways to land a trophy buck in Kansas. Option one is to buy some hunting land. Land prices are low in Kansas and this is the first choice for many deer hunters that plan on returning to Kansas every year. The second option is to lease some hunting land or splurge on an outfitted trip. Kansas offers the highest chance of getting a trophy buck anywhere in the United States.