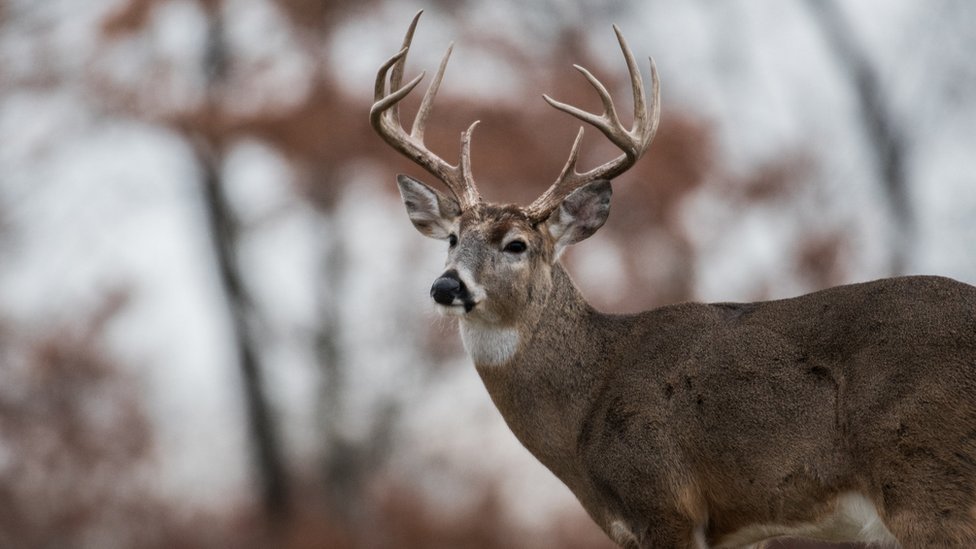 How much gun is needed to kill a deer? This question has long haunted hunters.

veness on game, and how to quantify it.Specifically: What size gun is needed to kill a deer?

No Need For Speed?

For many years, velocity has been considered by many to be paramount when judging a bullet’s killing ability from a given cartridge. Bullet energy has long been accepted by many gun writers – and thus by the shooting public – as the standard that cartridges are measured by. And while energy can be useful when comparing cartridges, it’s my opinion that it is far overrated, and only minimally useful in determining whether a bullet will do its job once it reaches its target.

A better measure, one that’s gaining popularity as more shooters learn of it, is known as the Taylor Knock Out value, or TKO. TKO takes into account bullet weight and diameter, as well as velocity. Energy only considers mass (weight) and velocity, without considering a bullet’s diameter – and diameter can and does make a big difference in terminal performance.

There is no perfect way to quantify a bullet’s terminal performance – I want to make that clear before I go any further.

I think TKO does a better job of doing so than foot-pounds (ft-lbs) of energy, but neither is ideal.

I have read recommendations that in general, a hunting bullet should be traveling at least 2,000 feet per second (fps), and carry at least 1,000 ft-lbs of energy to ensure a clean kill on a deer-sized animal. This is fine and dandy and may make for interesting reading, but here in the real world it’s just so much moot BS.

I have shot a good number of deer with a 44 magnum carbine, using 240-grain jacketed bullets – more than a dozen, at ranges varying from ten feet out to 115 yards. Never lost a one, even when my hits were less-than-perfect. Devastating wound channels and deer that drop on the spot are rules rather than exceptions with this gun and cartridge. Most of the time I never recovered the bullets, because they went all the way through the critter.

Here’s the kicker – that carbine has less than 2,000 fps of velocity at the muzzle! Out at 100 yards, which is very nearly the end of that cartridge’s effective range, velocity of its stubby, blunt 240-grain bullet is only about 1380 fps – yet it kills deer dead, reliably and repeatably. The slug still meets the 1,000 ft-lb requirement at 100 yards – but just barely.

I give this example only to illustrate that minimum velocity and energy requirements are not things you can hang your hat on. They are arbitrary at best, and grossly misleading at worst. Energy/velocity figures can work well when discussing only a given class of cartridges, but they are not the be-all, end-all definer of bullet performance that many believe them to be.

Speed Isn’t all There is

Is velocity important? Sure it is. A faster bullet gets to its target faster than a slow one – that’s a no-brainer. Is velocity everything? Nope. You must have a bullet of suitable construction – something that no formula does (or can) take into account. You must also have a bullet of adequate diameter and weight to give your target an efficiently killing wound. Key word there is efficiently. The tiniest bullet wound can kill, but we want our game to expire quickly – or in the case of self defense, we want to immediately disable someone attacking us – and so the bullet used must be efficient in doing its job.

Can we Measure Killing Power?

Okay, so how can we quantify with formulae the ultimate hunting (or self-defense) cartridge? Well, we can’t. It’s that simple – every method of comparison falls apart when taken to extremes, and the old adage that there are exceptions to every rule is very, very true in this context.

Still, there must be some way of comparing how well different cartridges will perform on game, right? Sure there is, but only to a point. TKO works better than energy, in my opinion, as a point of comparison, and comparison is all we’re going to get. A definition of a bullet/cartridge’s killing power just doesn’t exist.

Getting back to the title of this article, “What Size Gun do I Need to Kill a Deer,” the answer is largely “bullet placement.” There are many, many cartridges that will kill deer and kill them cleanly, but neither the biggest bore nor the fastest magnum will do so cleanly if you don’t hit the critter in the right place.

Hitting ’em Where They Ain’t

Now, I have been guilty of hitting deer where I shouldn’t have… where I didn’t mean to, but I did. I have made mistakes. If you hunt long enough, you will, too. At times like this, when your bullet placement isn’t wonderful, you do not want to be using a marginal cartridge – period. That’s one reason I like to have more gun than I may need when I hunt deer… because then the extra “oomph” can make a big difference in whether I get my deer or not. This has served me well over the years, as I have never lost a deer yet.

Mom and Dad taught me something that I believe in, and which applies here: It’s better to have it and not need it than to need it and not have it. There are also some words of the well-respected gun writer Ken Waters which ring true, the gist of which is this: There’s no such thing as overkill – you can’t kill game deader than dead.

But Some are Too Small

Devotees of diminutive cartridges such as the tiny 22s, 243s, 6mms, and various 25s would do well to consider this, for if they choose to follow that sage advice then they really ought to be looking around for rifles chambered for more powerful cartridges.

Do not start kids hunting deer with small cartridges – it is a mistake. Young ‘uns and women can handle shooting honest-to-goodness deer cartridges. ‘Nuff said on that.

How Dead is Dead?

Back to bullet placement… hit a deer in the vitals, break its neck or back, and you have a dead deer. How dead can a deer get? Fortunately, that’s one point that brooks no debate – dead is dead. But what is required of a cartridge to make it a reliable, efficient game-getter even when hits are not in just the right spot? Let’s look at some numbers and see if we can come up with anything concrete.

I’ll start with my pet 44 magnum Ruger carbine, which has killed a lot of deer over the years. Dad taught me to use the heaviest practical bullet in that carbine, which is 240 grains. Referring to my copy of Bob Forker’s very useful reference book “Ammo & Ballistics,” I see that at 100 yards it produces a TKO of around 20.0 to 20.3, with energy varying from 988 to 1015 ft-lbs. Velocity at 100 yards is a mere 1370 fps or so.

To be sure, these two cartridges are, while not quite on opposite ends of the spectrum, very different from one another. The 270 is a bottlenecked cartridge that uses a small-diameter, pointed bullet, which moves much faster than the stubby 44’s big, blunt projectile. Bottom line, the 270 beats the 44 in the reach department, but within 100 yards the 44 comes out on top.

From this comparison we can see that, given the chance, any cartridge-effectiveness formula will fall apart. So where does that leave us? Not in bad shape, really. We have decades of well-recorded big game hunting to fall back on, and when it comes to cartridges, there’s nothing really new under the sun. In determining how well the latest 300 super-duper mag will work on game, we need to just compare its performance with its most similar predecessor, probably either the 300 Winchester or Weatherby Magnum.

The same applies to most any untried hunting cartridge.

As for my own definition of a suitable deer-hunting rifle cartridge, I would call 27 a minimum caliber, and then I would only feel comfortable using heavy-for-caliber, well-constructed bullets such as the 150-grain Power Points I shoot in my 270 Savage. A TKO of 13 would probably be the least I would want, and in certain cases involving light bullets, even that is inadequate. Bullets that retain a TKO above 13 at longer range may also be inadequate killing tools, as is the case with the 44 Rem Mag at 200 yards. As is true with any cartridge-performance rule, this is a guideline that has many exceptions.

Maximum? There’s no such thing, as far as shoulder-fired centerfire rifles are concerned. Remember – you can’t kill game deader than dead.